Trek to Lama Dal from Chamba 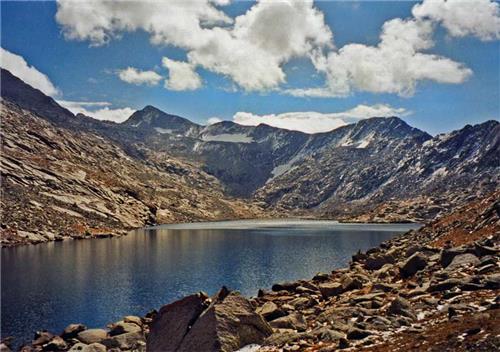 The district of Chamba is blessed with a number of water bodies. Apart from numerous rivers and streams, the district has five major lakes, located in its different parts; they are Khajjiar, Chamera, Gadasru, Manimahesh and Lama Dal.  Among them, Lake Gadasru is located near Tissa in Churah Tehsil. Lake Khajjiar and Chamera, on the other hand, are located close to Chamba and are easily approachable by motorable roads. If you intend to spend some quiet hours away from hassle and bustle of city life, these are places to go. In fact, these two lakes have turned into favorite picnic spots for the people of Chamba and Dalhousie. 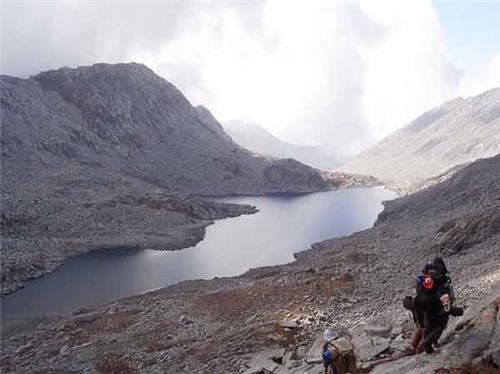 Close to the historic Belani / Balaini / Baleni Pass lie a group of seven lakes; Lama Dal is one among them. Originally, it was known as Lamba (long) Dal (Lake); but the local people used to pronounce it as Lama and so the lake is now known as Lama Dal

Lama Dal is located to the east of the city of Chamba at an altitude of around 3960 meter above the sea level. The distance between the two is barely 45 km as the crow flies. However, the road distance is much more. The lake, with a circumference of about 2.5 kilometer, is not only the longest in the group, but also the largest in the district. Kareri Lake, another popular trekking destination, is located across the Benaili Pass in the district of Kangra at a distance of 3 km from Lama Dal.

Bharmour on the way to Lama Dal 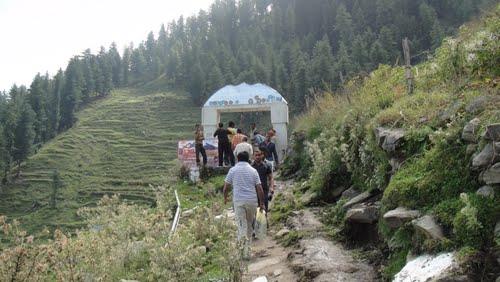 As we have already said, the route to Lama Dal lies through Bharmour, Chhatrari , Barie, and Drakund.   Regular bus service runs between Chamba and Bharmour.  The town (59.4 km from Chamba) also offers good accommodation and house a number of trekking companies that offer their services for a fee. Among them, Anna Adventures and Tours has its office located in the Main Bazaar and therefore, easily approachable; their contact numbers are as follows:

In addition, there is also a Mountaineering Institute located at Bharmour. You may also approach them for reliable guidance. The town is also famous for its Chourashi Temple Complex consisting of 84 ancient temples and Bharmani Mata temple. The later is located on a ridge and many experienced trekkers recommend a trek to Bharmani Mata temple for acclimatization purpose.

From Bharmour to Chhatrari on the way to Lama Dal

Chhatrari, located at a distance of 38 km from Bharmour is another interesting place on the way to Lama Dal. It is located at an elevation of around 6000 feet and is connected to Bharmour by jeepable road. The village is mainly inhabited by the Gaddis, a semi pastoral tribe that earn their living by rearing sheep and goats.

The village is also famous for a Shakti temple built in 680 AD. It is made out of wood  while the roofing is built out of slate. The outer wall of the temple is painted with vegetable dyes and depicts different Hindu gods and goddesses. The idol of Shakti Mata, the main deity, is made out of Panchloha, which is actually an alloy of five metals. A stone idol of Gugga, the legendary sculptor of Himachal Pradesh, also finds a place by the side of main deity. Stone idols of Shakti Mata can also be seen outside the shrine.  It is believed that those were the original idols that were worshiped before the metal idol was installed.

Chhatrari can be reached directly by motor vehicles (mostly jeeps) from Bharmour or by trekking through Gehra. The village has a Forest Dak Bungalow and also a PWD guest house and so if you intend to spend a night here you can comfortably do that. 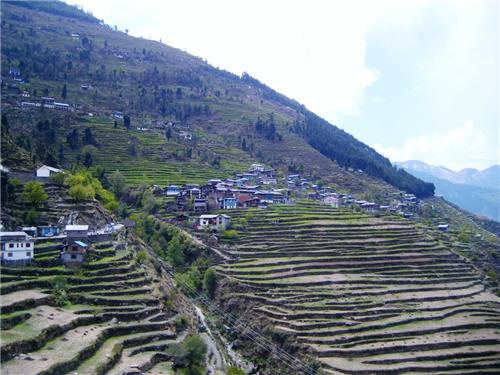 From Chhatrari to Barie on the way to Lama Dal

If you are traveling by jeep, you will reach Chhatrari by afternoon. In such a case, we would advise you to move on to Barie, a small village located at a distance of 12 km from Chhatrari and 50 km from Bharmour. The motorable road ends at this place and so the actual trek starts from here. In addition, the place does not offer any accommodation and so if you intend to spend the night here, you will have to spend it in tents. If you have time you may also visit Samra for acclimatization purpose.

The next destination, Drankund, is located at a distance of 10 km from Barie. After crossing the Barie village you encounter a Lam Dal Nallah; follow it and walk through a dense forest area. The gradient is gradual in this stretch and so it does not take you long to reach your destination. It is better to spend the night here and start afresh for your final destination the next morning. Drankund houses a Forest Dak Bungalow. You may stay here or use your own accommodation.

From Drunkund to Lama Dal

One should start the final trek early in the morning because today we enter the land of seven lakes. They are Lam Dal, Naag Dal, Kali Kund Dal, Chander Koop Dal, Dham Ghodi Dal, Sukh Dal and Naag Chatri Dal. The Baneli Pass, which is also referred as the Minkiani Pass, is located close by. The distance to be covered is 12 km, but an amateur trekker may take five-six hours to cover it. 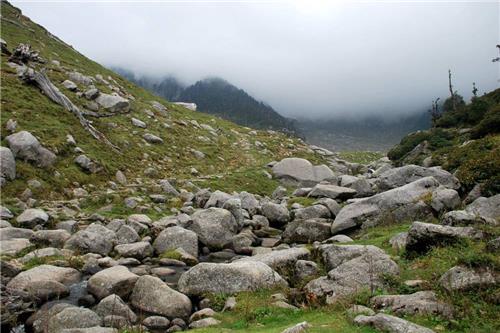 You start your trek with a gradual climb through a forested area; soon enough it becomes steeper and the tall trees are replaced by a wide stretch of grassland. That too is soon replaced by big and small boulders. The trek becomes slower and more tiring. However, your mood changes as you reach your destination. You simply feel exalted. 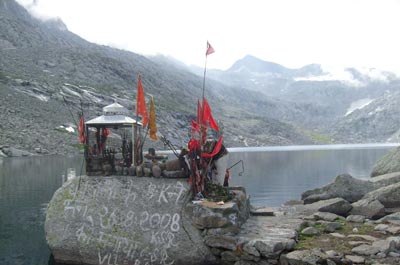 As we have already said, the Lama Dal is the largest of the seven lakes located in this area. It is also religiously very significant. The lake has a small but beautiful Shiva temple on its bank. In August and September, pilgrims come here to take a bath in this lake; they then offer puja to the temple. However, rest of the time the area remains isolated from rest of the world. Sometime you may also see shepherds belonging to Gaddi tribe grazing their goats and sheep.

Lama Dal is the origin of Lama Dal stream, which flows westward to form three more lakes. The water of both the lake and the stream is crystal clear. This is because the mountain in this stretch is largely made up of granite.

Other lakes in the group of tarns 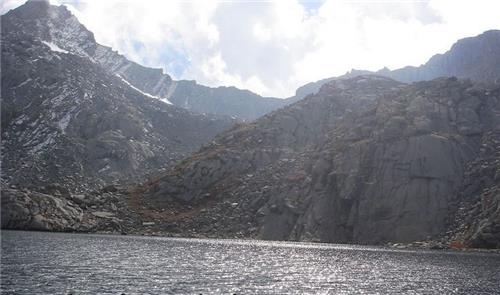 Among the other lakes let us first mention Kalikund; so named because it is shaped more like a well. It is located 150 / 200 meters below Lama Dal and is equally revered by the devout. Chander (moon) Koop Dal is another significant lake in this group. However, it is more famous for its beauty than for its religious significance. It is located at a higher elevation (4100 meter) than Lama Dal and has blocks of ice floating on it. Naag Chatri Dal, located on the other side of Dhauladhar range near the Indrahara Pass, is another religiously important lake in this group.

On the return journey from Lama Dal 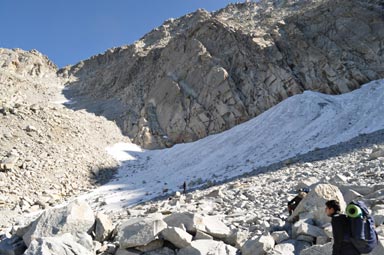 While returning from Lama Dal you have two options. Primarily you may choose to go back via the same route you came; that is via Drankund – Barie – Chamba. However, you may also choose to cross into the district of Kangra via Baleni Pass and trek to Mecleodgunj via Kareri Lake and Kareri Village. From there, you may catch a bus for Chamba.