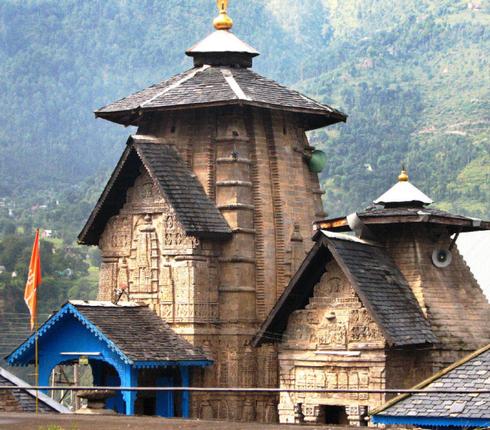 The city of Chamba is as much famous for its awesome scenic beauty as for its magnificent temples.  Some of these places of worship are more than one thousand years old while some have been built only a few centuries ago. Yet, all of them are known for their architectural excellence and aesthetic beauty

A unique point about the temples of Chamba city of Himachal Pradesh is that they mostly follow plains type of temple architecture, designated as shikara or spired temples. These temples are generally made with stones and have a conical spire on top of their sanctum sanctorum (garva griha). Another unique point about the temples is that they generally demonstrate a strong Kashmiri influence. Laksmi Narayan temple in Chamba is a prime example of this type of temple architecture.

Contrarily, Chamunda Temple, located on a spar of Shah Madar Hill, follows a typical hill type of temple architecture. Hill temples are always simple in construction. They generally consist of a small cella or chamber built on a square platform and have sloping roof made from slates or shingles. 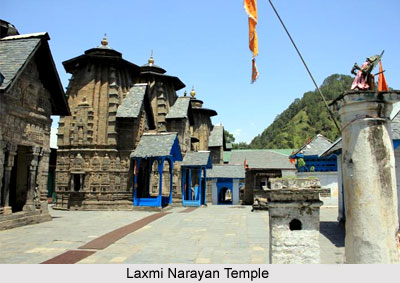 Lord Lakshmi Narayan is the presiding deity of Chamba. Therefore, Lakshmi Narayan Temple, built in the 10th century AD by Shahil Varman, is one of the most important shrines in the town. It is located inside a temple complex consisting of six different temples built over a period of time. Three of these temples are dedicated to Lord Vishnu and three to Lord Shiva. To know more about this shrine you may refer to our page on Lakshmi Narayan Temple in Chamba. 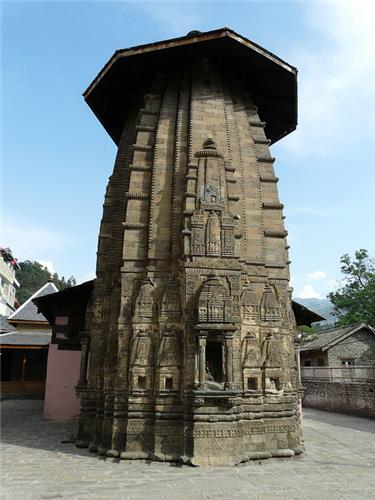 Champavati temple is another ancient temple built by Raja Shahil Varma in 10th Century AD. It is located near the treasury building in the heart of city and equals Lakshmi Narayan Temple in grandeur. The temple has been named after the king’s favorite daughter Champavati.

According to hearsay, Champavati was a religious woman who often went out all by herself to visit holy men. The king was very suspicious of these visits. One day he followed her in order to catch her red handed. However, when he entered the Sadhu’s den, he could not find anybody. Instead, he heard a voice, which said that his daughter had been taken away from him because of his suspicious mind. It also said that he should build a temple in the name of her daughter if he wanted to avoid further calamities. He then built this temple and named it after Champavati.

Mahishasur-mardini, a form Devi Durga, is the presiding deity of Champavati Temple. It has been built with stone in Shikara style of architecture. The walls in the temple are carved with beautiful motifs. The wheel roof on top the spire also attracts attention. Archeological Survey of India presently looks after this temple.

This is another stone temple built in Shikara style of architecture. It is said to have been constructed by Raja Salabahana in the second half of 11th century AD. The main deity in this temple is Lord Vishnu in Vaikuntha form.  The idol, made from Ashtadhatu (eight metals), has a body of a human being and three faces representing a man, a boar and a lion.

There is also another idol of Lord Vishnu, made from bronze. One should take time to admire it. It has been expertly executed and every aspect of this idol, starting from coiled hair to the dresses and ornaments, is perfect. This idol has four hands. There is a fully bloomed lotus in one and conch shell in the other.

In addition, the temple also has representations of few others gods in different niches. At the entrance you will see Devi Ganga and Devi Yamuna. Inside you will see Lord Shiva seated on a bull with Mother Parvati on his left. They have their respective bahanas seated in front. You will also see Surya Dev sitting on his chariot, which is driven by seven horses. Aruna, the chariot drivers can also be seen. The outer wall of the temple is also decorated with beautiful carvings.

The Hari Rai Temple is located near the gate of the Chowgan. It has been constructed on a stone platform and one has to climb couple of stairs to enter it. Unfortunately, the Fire Brigade building blocks its view and so one has to be very careful about locating it. 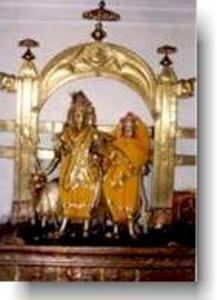 We do not know when Bansi Gopal temple was actually constructed. Approximate date puts it back to 11th century AD. We first find its mention in a copper plate issued by Raja Balavadhra in 1595 AD. Most probably, it was re-sanctified in that year.

This temple, built in stone in Shikara style, is dedicated to Lord Krishna. He is seen holding a flute and has his consort Radha at his side. The sanctum is square in shape and has an antaral and a mandapa supported by pillars. Just as Hari Rai temple this temple also has images of Ganga and Yamuna standing at the entrance. Other than the main deity, the temple also has few other deities like Lord Hanumana, Surya, Hari-Hara, Anantashayee Vishnu, Mahishasur Mardini etc. 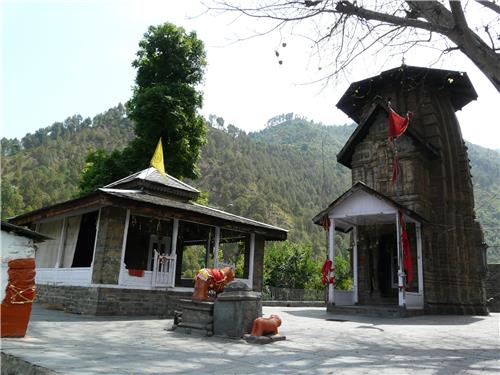 Vajreshwari Temple is another stone temple built in the 11th century AD.  Located at the end of Jansali Bazaar in Chamba, this temple is famous for its delicate stone work.

The pillars of Vajreshwari temple are especially noteworthy because they are almost covered with beautiful carvings of different deities. The temple also has beautiful representations of Goddess Durga and Lord Vishnu in the recesses close to the periphery. The two dwarpalas (gatemen) standing at the entrance also evoke admiration. In addition, the temple has eighteen one-line inscriptions on the outer wall and another three-line inscription on a pillar located in front of the doorway.
. 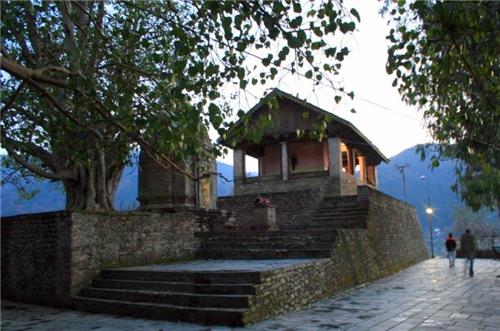 Chamunda Devi Temple, as the name suggests, is dedicated to Devi Chamunda, a form of Goddess Kali. It was constructed by Raja Umed Singh in 1762. It is located on a prominent spar of Shah Madar Hill and offers a holistic view of the city of Chamba.

As we have already stated, Chamunda Devi temple follows a hill type of temple architecture. Unlike other temples in the town it is made out of wood and has a gabled roof. The ceiling as well as the pillars and brackets of the mandapa are imaginatively decorated with carved figurine and this makes the temple artistically important as well. One of these figurines depicts Lord Shiva in tiger skin holding a trident, a damaru and a cup. Another figurine shows Yashoda, the foster mother of Lord Krishna, churning butter while baby Krishna is trying to steal it. In addition to these, gods and goddesses like Vishnu, Ganesh and Durga are also skillfully depicted.

There is also an agni kund or sacrificial pit in the center of the manadapa, indicating that regular havan takes place at this temple.

Sita Ram Temple, constructed with stone in Nagara style of architecture, is dedicated to Lord Rama and his consort Sita. It was built by by Batlu Dai, the wet nurse of Prithvi Singh, sometime during his reign (1641-1664). It stands at the crossroads of Mohalla Bangotu on a raised platform and faces south.  By the side of the main temple there is another minor shrine, dedicated to Hanuman. 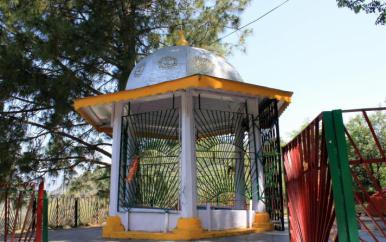 Suhi Mata Temple is an integral part of Chamba heritage.  It is located on Shah Madar Hill and consists of a simple memorial, a pindi dubbed with vermillion.  This small temple is dedicated to Rani Sunayana, the queen of Raja Shahil Varman.

As we all know, the town was founded by Raja Shahil Varman in 10th century AD. According to legend, drinking water was to be brought to Chamba town from a nearby stream through an aqueduct built for that purpose. But, due to some unknown reason, water could never enter the duct and people had to suffer because of that.

One night, both the king and queen had a queer dream. In that dream, the Goddess told them that water would reach the town only if a member of the royal family was sacrificed. The king got ready to give up his life for the sake of his subjects. But the queen convinced him that his survival was essential for the wellbeing of his subjects. They could not sacrifice their son either; because if they did that the royal house would not have any progeny to carry on the name. So it was decided that the queen would sacrifice her life so that her subjects could live in peace.

So, the queen was taken to the sacrificial ground and as per order of the Goddess, was buried alive. As soon as the spot was filled with earth water started rushing through the duct and people of Chamba had all the water they could wish for. According to legend, the temple has been erected at the very spot where the queen rested for a while to have a last look at her beloved Chamba.

To honor the sacrifice of the Queen, a three-day fair is held at this temple every year. People from far and wide come here to attend the fair. Young girls decked in their traditional costumes, sing an elegy called “Sukraat” in the local dialect.

Explore more about About Chamba