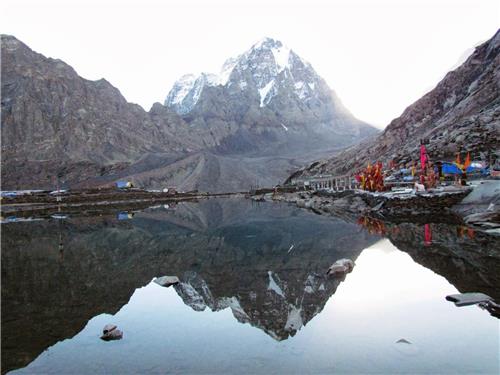 It is true that the city of Chamba is by itself an important tourist destination. At the same time, one has to admit that there are quite a few equally, if not more, enthralling spots scattered all over the district.  For instance, Bharmour, located at a distance of about 60 km from Chamba, is as much famous for its scenic beauty as for its archeological wonders. Then, there are Dalhousie and Khajjiar; the latter is often called Switzerland of India. However, Manimahesh Lake, located at a distance of 27 km from Bharmours, is by far more alluring. It is situated in the lap of Pir Panjal range at an altitude of 4080 meters at the feet of Manimahesh Kailash Mountain. However, it involves a thirteen kilo meters of trek.

Manimahesh Lake, surrounded by snowy peaks on all sides, has been formed by glacial depression and is watered by melting snow. The bank of the lake is covered with sand mounds; there are also boulders strewn all over. Grass does not grow here and the place is devoid of any kind of life.  Yet, it effuses a kind of divine beauty.

Manimahesh Lake is the origin of River Manimahesh Ganga, a major tributary of River Budhil. It appears in the form of a waterfall near Dhancho. Mount Manimahesh Kailash, also known as Chamba Kailash, is seen towering over this lake.  Together they make a pretty picture, especially at dawn.  On a clear day, the rays of the rising sun that fall on this snow covered mountain peak are seen reflected in the lake. However, the area looks its best from the end of June. During that period, melting snow from adjoining mountain peaks run down in the form of numerous streams and the place look truly gorgeous.

Manimahesh Kailash Parvat is part of a 4.6 km long range, whose average elevation is around 4960 meters. It has a number of streams originating from its different faces. Among them we must mention Bujhla, Dhancho Nala, Androl, Siv Karotar, Gauri etc. Incidentally, Gauri Kund is located on the said Gauri River. 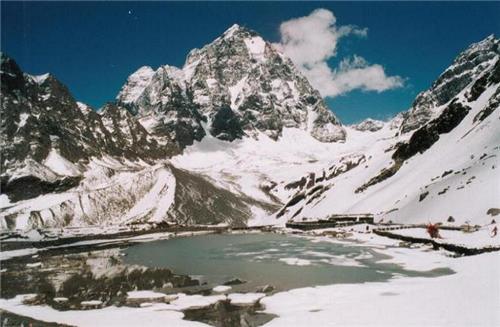 A unique point about the Mount Manimahesh Kailash is that it has never been scaled. An Indo Japanese team has once tried to summit it, but failed. While mountaineers and geologists attribute such failure to the poor rock formation at higher altitude devotees say that the mountain cannot be climbed because it is the abode Lord Shiva.

It is a common belief that the Lord along with his consort Devi Parvati resides at this very place. A rock formation on top of the mountain resembling a Shiva Lingam is said to be the manifestation of the Lord. He is said to have created the Manimahesh Lake for the pleasure of Mata Parvati. The snow field at the base of the mountain is considered as the Shiva’s Chougan; this is where the Lord is said to spend some happy hours with Devi Parvati.  Thanks to such legends, Manimahesh has great religious importance. The Government of Himachal Pradesh organizes Manimahesh Yatra every year during the month of Bhadra (August). Few private enterprises also offer the same facility. 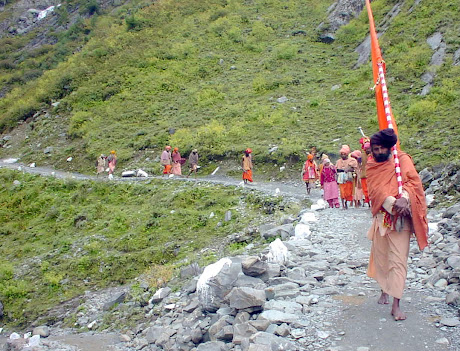 Manimahesh Yatra is always organized from Krishna Janmashtami to Radhashtami in the month of August and September. While most of the pilgrims start their trek from Hadsar near Bharmour, the actual yatra starts from Lakshmi Narayan Temple and Dashnami Akhra in Chamba.  Pilgrims must register themselves at Chamba before they are allowed to proceed. Those who start their trek from Hadsar may also do so at Bharmour.

The pilgrims, who start their trek from Chamba carry holy stick of Guru Charpathnath and walk all the way to Manimahesh Lake, many of them bare footed. Temporary accommodations in the form of tents are provided at regular intervals. Food stalls are also set up all the way. Consequently, pilgrims are not required to carry anything other than their personal belongings during this yatra.

If you start your yatra at Chamba, you will have your first halt at Rakh and then at Bharmour, Hadsar, Dhancho respectively. Please note that Hadsar is the last motorable point. From Dhancho Manimahesh Lake is around 9 km.  A brief halt at Bhairam Ghati is also scheduled in the last leg. 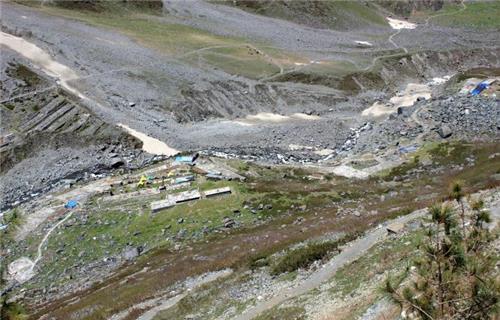 Dhancho is famous for its waterfall. There is a beautiful legend about it. It is said that an asura named Bhasmsura once tricked Shiva into giving him a boon that if he touches anybody’s head the person would turn into ashes (bhasma) immediately. Now, as soon as he got the boon, the asura ran after Shiva in order to touch his head. To save himself Shiva took refuge in this waterfall. Later, Lord Vishnu tricked asura into touching his own head and as soon as he did that he himself turned into ashes.

Gaurikund, located at a distance of 5 km from Dhancho, is another significant point. It is here Mata Parvati is said to have taken her bath. Ladies on pilgrimage to Manimahesh must take a bath here. For gents there is the Shiva Kalotri spring. It is 1 Km ahead of Gauri Kund and said to have originated from Shiva’s feet. Many also say that this is where Lord Shiva takes his bath. Two kilometers from there is another water source known as Kamal Kund.  When you reach that you would know that you have almost reached your destination; Manimahesh Lake is just ahead of it. 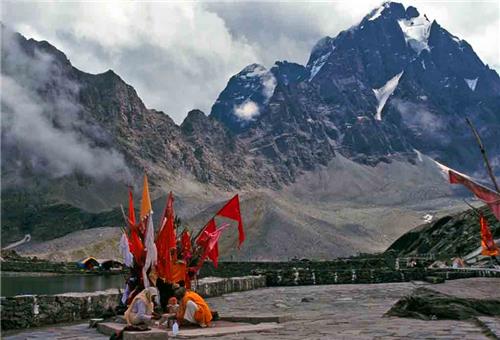 On reaching the Manimahesh Lake, you will see different ceremonies being held throughout the night. In the following morning, devotees take a dip in the icy cold water and go round the lake three times. This is termed as Parikrama and the dip is termed as naun. There is also a roofless temple on the other side of the lake.

As we have already said, many people travel to Bharmour by vehicles from Chamba and then join the procession. There is a helicopter service to and from Bharmour. Therefore, you may also travel straight to Bharmour by helicopter and then travel by hired vehicle to Hadsar. Ponies are available on hire from this point. You may also undertake the entire yatra by helicopter, but that will naturally cost more. 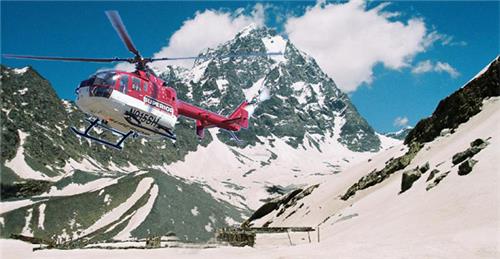 Many avid trekkers and nature lovers also visit Manimahesh Lake; but they generally avoid the period of yatra because of the crowd. If you are one of them you may also visit the Lake anytime in summer as long as the weather holds good. Such people have three options.

The easiest way to reach Manimahesh Lake is to go via above mentioned route. You first reach Chamba and then Bhramour. There are frequent bus services between these two towns. From Bharmour it is better to get a shared taxi for Hadsar because the bus service is not very regular in this route. In addition, you may contact travel agents like Anna Adventures and Tours in Bharmour. It is located in the Main Market and may offer a good package. Otherwise you may contact the Mountaineer Institute there. They will offer the necessary guidance. Their phone numbers is 01895-225036. 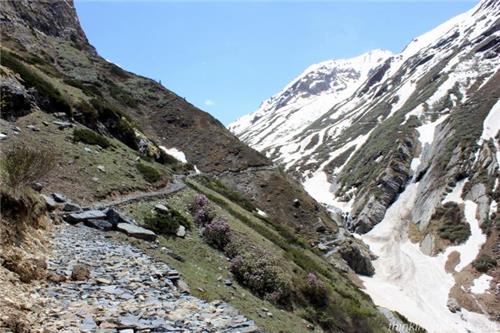 Hadsar is a sleepy village on the bank of River Budhil. Since motorable road ends here one has to cover the rest of the distance on foot. The place has a couple of eateries and offers basic accommodations. You may spend the night here or start your trek in the morning. Bharmour also  offers a numbers of hotels and guest houses. It is up to you to decide.

Unless you have already done it, it is better to hire a guide from Hadsar. If you intend to reach Manimahesh the same day you need to start quite early; but it is more prudent to make a night halt at Dhancho, the last human settlement on way to the Manimahesh Lake. People here also offer tents and other necessary items to the trekkers. Guides are also available here. However, it is a temporary settlement that exists only from May to September. As the winter sets in, the inhabitants move to a lower elevation.

The route from Dhancho takes you through many zigzag paths among birch forests and flowered meadows.  However, it is steeper than the previous day’s trek. At the same time, the scenery is so mesmerizing that one tends to forget the hardship. Do take time to admire the Dhancho Waterfall on Gauri Nallah; Lord Shiva is supposed to have hidden in this waterfall. Gouri Kund comes next. Manimahesh Lake is around two km from here.

Manimahesh Lake is also approachable from Lahaul and Spity through Kugti Pass and from Kangra and Mandi through Karwarsi Pass or Jalsu Pass.  However, the route through Chamba is the best and hence the most popular.