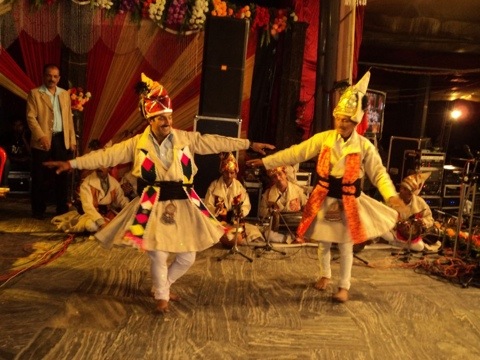 As Chamba was isolated from rest of the world for a long time, it with passage of time evolved very unique culture. Later as communication with neighboring regions began to improve the customs and traditions of this area began to undergo a slow change. The people assimilated what was good in others and thus enriched their own. Today, the area has a vibrant culture that is unique in its own way, but at the same time is in sync with all India traditions, beliefs, art and architecture.

Although the official language of the state is Hindi, the residents here use a Pahari dialect known as Chambiali or Chameali.  However, this dialect is mostly confined to the city of Chamba and its adjoining area. Outside the city limits, people generally speak in other Pahari dialects. For instance, if you move towards Bharmour, you will find that the people there speak in a slightly different dialect, known as Gaddi-Bharmouri language. Then again in Churah Tehsil, people speak in Churahi language while in Pangi Valley, they speak in Pangwalia. However, all these dialects, being branches of Pahari language, are quite similar and therefore, people of different regions can easily communicate with each other.

As such, Pahari is a branch of Indo European language and is spoken by a large section people across the Himalayas. The most interesting point is that the Pahari spoken in this region is tonal, which means that the pitch plays an important role in this language and sometimes change of tone changes the grammatical meaning of the word. In this, Pahari used in Chamba and its neighboring districts is more similar to Punjabi language than the Pahari spoken in eastern Himalayas.

For ages, Hinduism has been the most important religion in Chamba. This is reflected in its many temples as well as in its fairs and festivals. However, the city also has a sizeable number of Muslims, Sikhs and Christian as well.

The district of Chamba is also home to two nomadic tribes; the Gujjars and the Gaddis. Among them, the Gujjars, who have migrated to Chamba from the neighboring Kashmir, are follower of Islam. Gaddis, on the other hand are Hindus. The majority of them have migrated to Chamba in the 10th century AD. They are devotees of Lord Shiva and at the same time follow a type of animism. 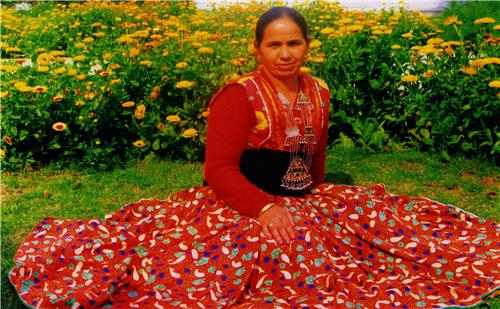 Just as in rest of India the day to day attire in Chamba consists of trousers and shirts for men and sarees and salwar-kurta for women. However, unlike many other states, Chamba is very rich in traditional costume. In ancient time, men in Chamba wore fine woolen chaddars (blankets) known as ‘pattu’ around their waist; this they tied with a patka. The women too wore full-length dresses made of wool. However, the Gaddi men used to wear a loose fitting woolen garments known as chola; it was always white in color and was girdled with a black woolen rope. This was generally accompanied by a white embroidered cap. Gujjars on the other hand, preferred red, blue and black.

However, mode of dressing has undergone a change since then. Today the traditional dresses worn by women in Chamba consist of a pyjama known as ‘suthan’ and a ‘pairahan’ which covers the upper part of the body. She also has a chaddar or dupatta covering her head. However, the ceremonial dresses are more elaborate. In such time, women wear a full length gown accompanied by a blouse that covers the upper part of the body up to the waist. It is known as Pashwaj. The traditional dresses worn by men consist of tight fitting pyajama and a knee length tunic known as ‘angrakha’. 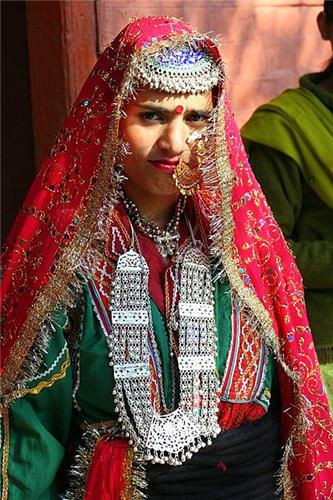 Women in Chamba wear different types of ornaments made out of silver and gold. They come in gorgeous designs and look truly pretty. The head ornaments too come in different varieties. Following are few of them:

Festivals and Fairs in Chamba

The people of Chamba celebrate different types of festivals. Among them the Minjar festival held in the month of Shravan (July-August) is most important. It is celebrated to commemorate the victory of Chamba over Trigarta and to ensure good crops. Besides, there is the Sui Mata festival, which is commemorates the sacrifice of Queen Sunayana, the wife of King Shahil Varman. 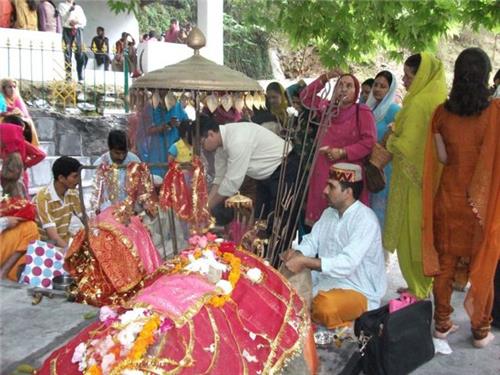 This festival is held in the month of April and is celebrated mainly by ladies of Chamba. There is an interesting story behind this festival. To be acquainted with it you may refer to the Sui Mata Temple section of our page Religious Places in Chamba. While the actual festival is celebrated from 15th Chaitra to 1st Baisakh, the Sui Mata fair is held for four days. The festival begins with the image of Queen Sui/Suhi Mata being carried to her temple in the Shah Madar Hill from her abode in Rang Mahal Palace. Ladies in their finery accompany this procession singing many traditional songs. They also offer puja and ask for boons. They also sing and dance to honor the brave queen.

For Minjar festival you may refer to our page of the same name.

Music and Dance in Chamba

Over the years, a wide variety of dance form has evolved in Chamba. They illustrate the geographical, religious, social, cultural and anthropological difference of this area. Among them, Pharati or Khad-dumbi is a common dance form that is performed during important ceremonies such as wedding.
Some other dance form popular here are Gaddi and Gujjar dances, Dandaras, Nat, Nachan, Dhamal, Dangi and Kikl etc. Read More...............

In addition, the area is also rich in vocal music and different types of songs are sung on different occasions and moods. The area is also highly developed in handicrafts and painting. In short, Chamba has a rich culture that covers every aspect of it.