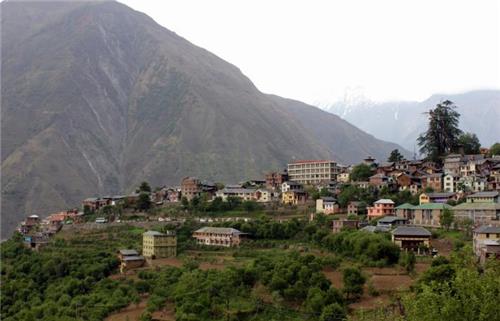 Bharmour, located at a distance of 59.4 km, is one of the most interesting places to visit from the city of Chamba. If you had gone through our page on history of Chamba, you would know that it was here Raja Maru (6th century AD) first established his capital.  Later in 10th century AD Raja Shahil Varman shifted it to the newly built Chamba. Therefore, we see that this town, then known as Brahampura, has been the capital of Mushana dynasty for about four hundred years. Unfortunately, none of palaces exists today. People however, believe that they were located near the Chougan in the northern part of the town.

While Bharmour being the capital of Mushana dynasty is a historical fact there are also many legends concerning this town. It is said that long time ago Devi Brahmani had her garden at this very place. Her son had a pet bird, which was killed by a peasant. The son died out of this grief and so did Devi Brahmani.  However, they never forgave the people living here and began to haunt them. So the residents of the area began to offer puja and over the time she was elevated to the status of a Goddess. A temple was later built in her name.

Then one day Lord Shiva came here with 84 siddha yogis (enlightened sages). They were all going to Manimahesh and stopped here for a night’s rest. Since the land belonged to Devi Brahmani she was furious with Lord Shiva for trespassing. With humility Lord Shiva placated her and asked her to allow the yogis to spend the night there. When the Goddess agreed, he granted her a boon. According to that anybody wanting to visit Manimahesh temple must first take a dip at the Brahmini Pool. Otherwise, he would be deprived of the fruit of the pilgrimage. Since then it has become a norm and every pilgrims to Manimahesh first has a dip in this pool. Moreover, the 84 Yogis turned themselves into 84 Shiva Lingas; they have been living here since then. 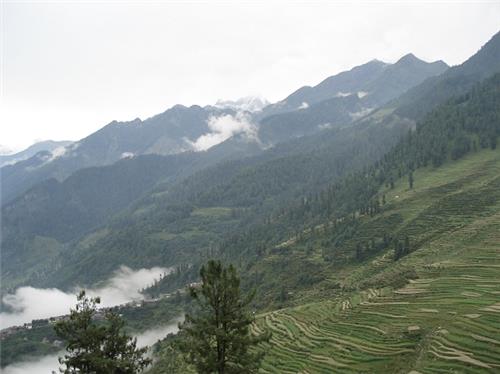 The route to Manimahesh Lake goes through this town. Therefore if you would like to go on a trek/pilgrimage to Manimahesh you must first visit Bharmour. Apart from that, the town has a charm of its own. The main attraction of this town is the ancient Chourashi Temple Complex consisting of 84 shrines. There is also the Bharmani Mata Temple Complex to visit. On top of that the area is effuses natural charm that is hard to find anywhere else. The helipad, in the western part of the town, provides a wonderful view.

Although the legend says 84 siddhas, who accompanied Lord Shiva, turned themselves into 84 Lingas, a more realistic version says that they had come from Kurukshetra and when they reached Bharmour , they liked it so much that they decided to stay put and meditate. The Chourashi (meaning eighty four) Temples are dedicated to these 84 saints. 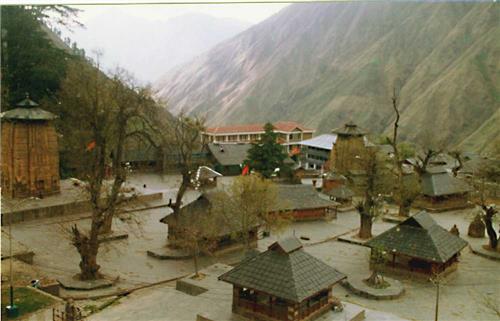 As we have said, the Chousrashi Temple Complex consists of 84 shrines. Following are few of the more important ones:

Among the above mentioned temples, the Lakshana Devi temple is said to be the oldest and dates back to the time of Raja Maru. Here the Goddess is represented as Mahishasuramardini, the slayer of demons. It retains the old architectural beauty to a large extent. Contrarily, the Ganesha temple at the entrance has been partially destroyed by fire. The bronze idol of Ganesha has also been mutilated to some extent. 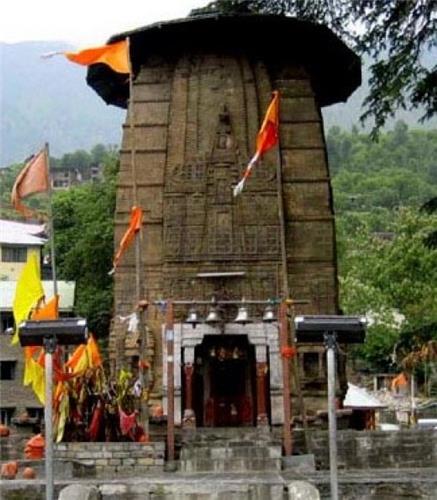 However, the Manimahesh temple, located at the center, is the main temple in the complex.  It houses
a Shiv Lingam resting on big plinth. Unlike the other two temples made out of wood, this temple is built out of stone in Shikhara style, much like the Lakshmi Narayan Temple in Chamba. Close to this temple is a deodar tree; it is also deemed holy by the devotees. It may also be noted that the temple merely shares its name with Manimahesh Lake, which is located further off in the lap of the Pir Panjal Range of mountains.

The Nar Singh Temple is another impressive shrine in the complex. It is dedicated to Lord Narasingha, an incarnation of Lord Vishnu in half man half lion form.  The temple has been built out of stone in Nagra style by Queen Teibhun Rekha in 950 AD. 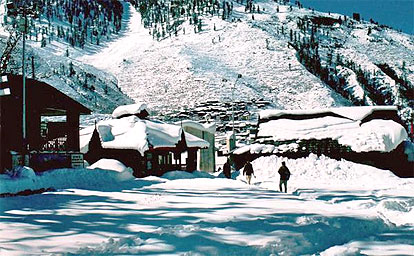 Another interesting point in this complex is the seat of Chitragupt. It is located in front of the Dharameshwar Mahadev Temple in the northern corner of the complex. It is believed that each departed soul has to stand in front of this temple before he is allowed to proceed further. Chitragupt, on the other hand, is supposed to keep record of our good or evil deeds.  That is why he has his seat in front of this temple.  The seat is actually a stone slab protected by wooden fencing and is marked with a ring and a paduka, which is represented by a foot print.

One must also visit Ardh Gaya, which is also known as Ardh Ganga or Gupt Ganga. It is a pool full of crystal clear water. It is said that Mother Parvati wanted to have a bath in the Falgu River at Gaya; but that was not possible for the time being. So Lord Ganesha shot an arrow into the earth and water from seven holy rivers (including Ganga and Falgu) began to ooze out. Devi Parvati then had a bath in this pool. Today it is believed that having a bath in this pool absolves one of all his sins. 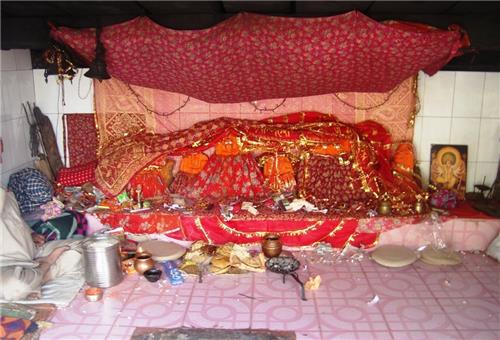 Another significant temple in Bharmour is that of Goddess Bharmani Mata. It is located at a distance of 4 km on top of a ridge. She is the patron Goddess of the town and is much revered by the residence here. A pool in front of the temple is equally significant. Pilgrims, who wishes to take Manimahesh Yatra, must first have a dip in this pool. Otherwise, the yatra will be considered incomplete.

Bharmour can be reached from Chamba via Main District Road 52. The distance between the two towns is about 60 km and so oneshe can make a day’s trip to Bharmour from Chamba. However, to appreciate the real beauty of the place one must spend a night or two here. Public Works Department has a guest house in this town; you may book rooms by calling at 01895-225003 or visit the PWD office in person. 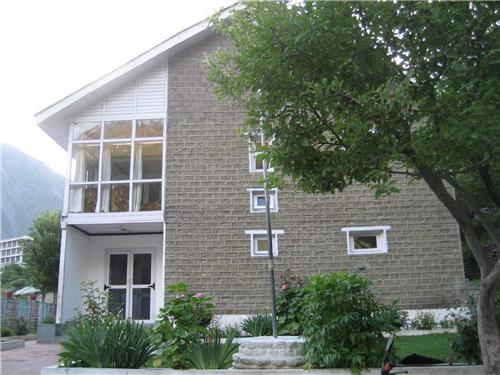 In addition, Himachal Pradesh Tourism Development Corporation also runs a budget hotel, named Gauri Kund, in Bharmour. To book rooms you may call at 01895-225133 or email at chamba@hptdc.in

Besides, there is Bharmour View Hotel located in the Main Bazaar near the HDFC Bank. To book rooms you may call at 01895-225090. In addition, you may look into the Chourashi Hotel and Restaurant located in the same area.

Contrarily, if you intend learn about the local culture you may choose Rajdhani Guest House run by a local family. To book rooms you may call at 01895-225084.